Lawless Judges Continue to Wage Lawfare Against the Trump Administration

Another day and another out of control nitwit in a black robe with no accountability decides he can not only interpret law, but he can act in the role of a cabinet secretary.

The subject, of course, is the Deferred Action on Childhood Arrivals program known as DACA. DACA is a program that was not established by Congress, it wasn’t established by Executive Order, it wasn’t created by DHS rule-making under the Administrative Procedure Act; it was established by a memo former DHS Secretary Janet Napolitano sent out to her field staff directing them to not deport illegal aliens who allege that they were brought to the US as children. By the way, if you want to understand the influx of children in the illegal immigrant stream hitting our southern border, you don’t have to look an further than this memo for an explanation.

DACA was accompanied by a second memo called, disingenuously, Deferrred Arrival for Parents of Americans (DAPA). This program gave safe harbor to basically anyone an DACA enrollee had come into contact with. DAPA was ruled unconstitutional by a federal appeals court because it created a residency authorization that did not exist in law. This is important to keep in mind because this will be the ultimate fate of DACA which is now the subject of a lawsuit being heard by the same federal judge who stuck the fork in DAPA.

Be that as it may, three federal judges have now ruled that a memo written by a previous administration’s political appointee can’t be rescinded by that appointee’s successor in either that or a later administration. This whole logic is bonkers but you only have to look at the path of the Trump travel ban to understand that some federal judges are in a state of open mutiny against the administration and the Constitution and making rulings simply to frustrate the ability of the administration to set policy it is entitled to set.

A D.C.-based federal judge on Friday ordered the Trump administration to restart in full the Deferred Action for Childhood Arrivals program.

The restart won’t be immediate. U.S. District Judge John Bates said Friday that the order would be delayed until Aug. 23 to allow the government to appeal, but he denied a Justice Department motion to reconsider his earlier decision, saying there were still deficiencies in the administration’s rationale for rescinding DACA.

“The court has already once given DHS the opportunity to remedy these deficiencies — either by providing a coherent explanation of its legal opinion or by reissuing its decision for bona fide policy reasons that would preclude judicial review,” said Bates, “So it will not do so again.”

He also threatened to vacate the memo ending DACA — and thereby restore the program in full — if Trump officials could not present an adequate reason for ending it.

…
Bates said the Nielsen memo, like Duke’s before it, “offers nothing even remotely approaching a considered legal assessment that this court could subject to judicial review.”

The underlying issue hear is a gross disrespect for separation of powers by this judge. The Napolitano memo was simply a policy preference, albeit, an unconstitutional one. Rescinding her memo is simply another policy preference, one that brings the way ICE operates back inside the parameters of federal law. There is no legal reason why Secretary Nielsen has to justify her actions,in regards to this, to a federal judge. This action is not even created via agency rule-making and if it were, under the Chevron doctrine, this judge would be forced to accept the agency’s interpretation of the rule.

There is nothing I’d like more than to see President Trump have his own Andrew Jackson moment and tell this district court judge to just f*** right off. And do it by Twitter. Without warning Jeff Sessions.

The bright side to this is that we are on the cusp of the Supreme Court forbidding circuit court judges from issuing nationwide rulings. In his concurrence to the travel ban case, Trump vs. Hawaii, Justice Thomas said:

I am skeptical that district courts have the authority to enter universal injunctions. These injunctions did not emerge until a century and a half after the founding. And they appear to be inconsistent with longstanding limits on equitable relief and the power of Article III courts. If their popularity continues, this Court must address their legality.

Earlier in the week when the Ninth Circuit upheld the unconstitutionality of the Trump administration requiring municipalities to follow federal law as a condition of receiving federal grant money, that circuit was careful to remove the nationwide injunction imposed by the circuit court judge.

It is clear that Justice will appeal this grotesque usurpation of power:

Justice Department spokesperson Devin O’Malley told BuzzFeed News that the court’s order does not mean DOJ will be backing off its position that DACA “was an unlawful circumvention of Congress” and “was susceptible to the same legal challenges that effectively ended [Deferred Action for Parents of Americans and Lawful Permanent Residents (DAPA)].”

As for next steps, O’Malley added, “The Justice Department will continue to vigorously defend this position, and looks forward to vindicating its position in further litigation.”

With Gorsuch and, imminently, Kavanaugh on the bench, I think it is a safe bet to say that this practice of a single entry-level federal judge creating policy and law for the nation is going the way of the passenger pigeon. This case may be what causes it to happen and if it does I’ll start a GoFundMe to send this judge a case of Vaseline to sooth his chapped ass.

What Better Way to ‘Honor’ Christian George Floyd Than by Firing Up a Good Old-Fashioned Bible-Burning in Portland? Man's Penis Falls Off, Doctor Adds One to His Arm

The Difference Between GM and Ford 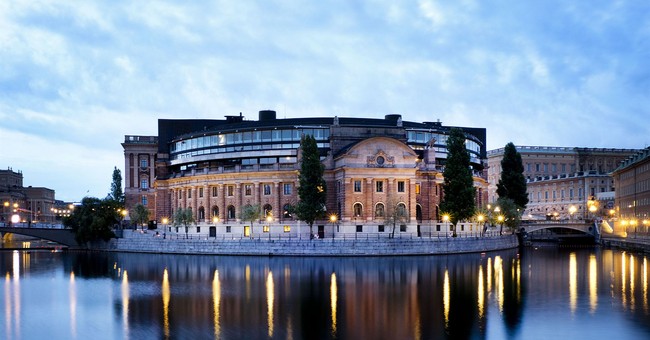