Over the past two days, in what appears to be a cartel action, YouTube, Facebook, Apple, and Spotify have all pulled content produced by Alex Jones’s InfoWars project for violating their community standards. To add insult to injury:

There are several parts to this that should make all of us concerned.

None of the companies involved in this action are considered “publishers.” While publishers bear some legal culpability for what they print, YouTube, etc., have a legal safe harbor in that they are considered communications platforms and Section 230 of the Communications Decency Act immunizes online platforms from being sued for what appears on that platform. This is not a bad law. You shouldn’t be able to sue a bullhorn company because Al Sharpton used one to generate an anti-Semitic riot. What it does mean is that the decision to pull Jones, while leaving Louis Farrakhan untouched indicates this is less about “community standards” than it is about politics.

CNN is claiming they and other media lobbied to get InfoWars pulled.

Facebook invited me to an event today where the company aimed to tout its commitment to fighting fake news and misinformation.

I asked them why InfoWars is still allowed on the platform.

I didn't get a good answer.https://t.co/WwLgqa6vQ4

Important to note that tech platforms did not enforce their own rules and take action against Alex Jones / InfoWars on their own accord.

It took media outlets to point out for weeks that InfoWars was skirting the rules on these tech platforms for them to enforce own standards. 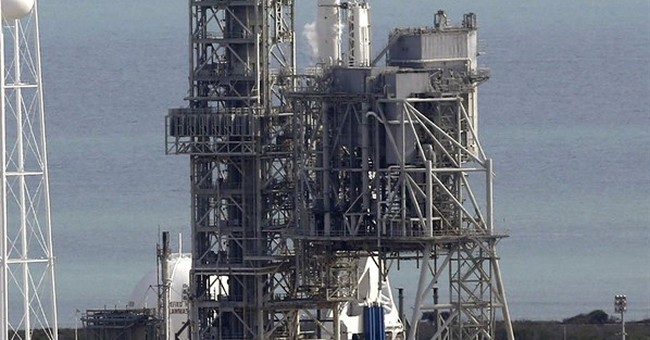 The fact that CNN has the temerity to accuse anyone of spreading false information it sort of hilarious but, if we suspend our skepticism and credit Darcy with being able to utter the truth, then this looks like a media cabal, or actually a media mean-girls club, decided to deplatform InfoWars and actually succeeded. Keep in mind this is basically the model these same clowns used to drive firearms related information and conservative videos from YouTube. This is the first time, however, that the model used on YouTube has been rolled out across platforms targeting one outlet.

This, in particular, should raise grave concerns because their next target it pretty clear. MSNBC’s Katy Tur refuses to let guests refer to Daily Caller reporters as journalists.

And the self-avowed godfather of the deplatforming of InfoWars has started targeting the Daily Caller in the blowzy afterglow of his victory:

The Federalist is clearly going to be a target as well.

Infowars is the tip of a giant iceberg of hate and lies that uses sites like Facebook and YouTube to tear our nation apart. These companies must do more than take down one website. The survival of our democracy depends on it.

If you claim to be on the Right—and you’re not alarmed by this—you’re no kind of ally. https://t.co/our2glLINU

Here is where I cheerfully depart company with those who declare “they are private companies, they can do what they want.” If you believe that, I’m not going to try to convince you otherwise. In the real world, Google and Facebook and Apple and to a lesser extent Twitter provide the only real outlet available for political activists and citizen journalists to communicate. What they communicate, so long as it doesn’t fall into areas that are clearly criminal violations, should be none of their concern. They can’t have this both ways. If they are going to act as publishers they need to be treated as such. If they are going to claim to be platforms, then they can’t be gatekeepers for information, particularly political information, that passes over them because we know how this movie ends. These platforms/publishers are working with groups like the SPLC and Snopes and Politifact to identify what is “fake” (Politifact “fact checked” Ted Cruz’s opinions on the Iran nuclear deal and declared his opinions false) and what is “hate speech” (the SPLC labeling the Family Research Council as purveyors of “hate speech” led to a leftist attempting to carry out a massacre at their offices).

What is under attack here is not Alex Jones’s nutbaggery. The objective is to move any dissenting media or even nutty media off of widely available platforms and force it into internet ghettos where it can be slowly starved to death. InfoWars is simply a test run. We’ll see the same strategy aimed at other right-leaning media in the very near future.

I think we’ve reached a point where these major media platforms need to be told by Congress and by the FCC that they are expected to either behave like public utilities or they will be treated like rapacious monopolies and broken up.

WaPo Is Not Even Pretending to Be Unbiased Anymore