Is the climate “warming”?  The climate ALWAYS changes and always has throughout the millennia of Earth’s existence. Climate alarmists claim that recent warming is due to mankind’s CO2 emissions since the beginning to the Industrial Revolution. Never mind that studies have shown that CO2 increases have been lagging indicators in past warming cycles, as well as considerable dispute that a trace gas like CO2 could contribute an any significant way to any warming since 1850 or so. Personally, I believe it is no coincidence that alarmists have zeroed in on CO2, a main by-product of advanced human civilization, as the culprit. These people are for zero growth, by and large, as their favorite policies reflect. That is part of the so-called “Green New Deal,” along with a totalitarian mandate to completely shift the world economy to “green energy sources” in lieu of the energy sources that have built human civilization since the beginning of the industrial age, i.e., coal, oil, and natural gas. What do the actual data say about warming?

Cracks in climate alarmism. A lot of warmist attention has been focused on disproving or undermining the fact that there has been a “hiatus” in global temperature increases over the past couple of decades. Alarmists have even proposed data adjustments that would show that global warming has been proceeding uninterrupted despite the apparent plateau over the past almost two decades. Many skeptics question the data adjustments (as do I).  One such question is presented in this article from a couple of years ago.

As noted in the comments section, “it is hugely damaging to the image of climate alarmist advocates that skeptics are now openly questioning whether there has been tampering with the raw data to exaggerate evidence for global warming. People have an instinct about dishonesty and often have zero tolerance for people in power lying. It is like a switch: switch it and your reputation and everything you say is turned to dust.”

And another pertinent comment: “If data are important, then data collection and accuracy are important. This is particularly true in fields such as climate science, in which it is impossible to rerun experiments plagued by bad or missing data. The cavalier attitude of climate science toward data accuracy and comprehensiveness is appalling.”

Yes, indeed; the underlying data are key to understanding the truth about climate change.

Manipulating climate data. Thankfully, a couple of videos have been produced that explain how the government manipulates climate data to support alarmist theories. Here is the first one that details how the UN’s Intergovernmental Panel on Climate Change (IPCC) manipulated data to get the alarmist conclusions they sought, as explained here:

[This video provides a] chronological look at the original IPCC investigation into global temperature changes, revealing how it was compromised by a desire to reach a certain conclusion, with senior scientists deliberately downplaying contradictions in the underlying data in order to present a tidy narrative. This is a devastating summary of how the climate change scientific sausage was made. Not one person in a thousand knows what is authoritatively revealed here about the data series underlying the now iconic “hockey stick chart.” [The Hockey stick is thoroughly debunked here:]

Next up is a devastating video that exposes how the US government agency responsible for providing annual climate assessments manipulated data to provide alarmist propaganda, as described in this article:

U.S. Global Change Research Program (USGCRP) and its affiliate agencies are tasked with educating a trusting public about Earth’s ever-changing climate. Most Americans would be shocked to know that USGCRP’s climate assessments are little more than brazen environmental propaganda, and what follows is convincing proof of that contention.

As part of his efforts to put the glare of bright light on junk climate science, [Tony] Heller produced an absolutely devastating video that lays bare the fraudulent presentation of climate data by the U.S. Global Change Research Program.  How so?  To produce its frightening assessments, USGCRP cherry-picks the starting point of climate graphs to give the false impression that hot days, wildfires, sea level rise and other climate indicators are undergoing cataclysmic negative changes, when just the opposite is true, as Heller’s video clearly shows:

The data massaging conspiracy. Climate alarmists constantly claim that an “oil-and-gas industry-funded cabal” is part of a conspiracy to undermine (alarmist) climate science. Yet, like Leftists in other spheres, the alarmists were in fact guilty of what they accuse others. Remember the Climate Gate 2.0 emails from several years ago?  It is highly illuminating that the likes of Michael “Hockey Stick” Mann frequently used the phrase “the cause” in many of his emails, don’t you think?  The details of what the alarmist cabal and their media allies have suppressed and tried to explain away are contained in this article.

Conclusion. Manipulating climate data – and coordinating that manipulation – has been the alarmists’ modus operandi in “proving” their crackpot theories on anthropogenic global warming from the very beginning. Thankfully, skeptics are pushing back and exposing the lies with greater frequency than ever before. Be sure to watch those two videos, as they have been suppressed by the alarmists and their media allies for obvious reasons (they destroy the case for the “Green New Deal”).

Bernie and Biden: Two Old Geezers Talk Past Each Other, Part V 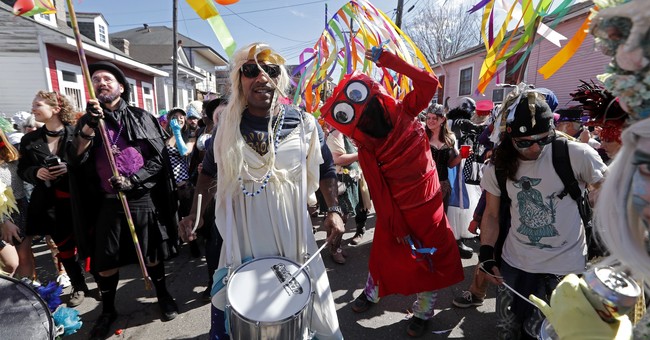 Did Hillary Clinton Just Celebrate the Spread of Coronavirus to 'Own' Trump? Sure Looks That Way