On 23 January, the Foreign Intelligence Surveillance Court (FISC) admitted that two of FISA warrants submitted by the Obama-era DoJ and FBI were in fact fraudulent:

The Justice Department has concluded that two of the four court orders allowing the FBI to conduct secret national security surveillance on former Trump campaign aide Carter Page were not valid because the government made “material misstatements” in obtaining them, according to a newly declassified judicial order.

The disclosure by James Boasberg, the top judge on the Foreign Intelligence Surveillance Court, underscores the extent to which the FBI bungled its handling of a highly sensitive case, a failure that is continuing to have serious policy and political repercussions.

And under congressional questioning by Congress in February, FBI Director Christopher Wray confirmed that the FBI illegally surveilled Carter Page:

Wray made the claim during congressional testimony before the Democrat-led House Judiciary Committee earlier this week, as Republicans pressed him for answers about the bureau’s response to the Justice Department watchdog’s FISA abuse report.

So the DoJ and FBI finally admit what we already knew – that those FISA warrant applications, which were based on the fake Russian dossier, were fraudulent from the very beginning. We also know that the Deep State is covering its tracks in that regard, as the Obama-appointed FISC judge Boasberg had already selected a former Obama DoJ lawyer to “assist” in the review of those FISA applications and in recommending “corrective actions” to preclude a repeat of the defrauding of the FISA court, as reported here:

Kris, a frequent contributor to the left-leaning Lawfare blog and a former assistant attorney general in the Obama DOJ’s national security division, has been an outspoken critic of President Trump’s claims that a “deep-state coup” was orchestrated to undermine his 2016 election. He has also had extensive experience with the FISA Court, having served as an amicus curiae, or special adviser, since March 2016.

This is just a continuation of Obama-era Deep State corruption at the FISC. Kris was knee-deep in the fraudulent FISA applications to begin with! He personally defended the Carter Page applications! Imagine how the Democrats would scream if Judicial Watch’s Tom Fitton and former Acting Attorney General Matthew Whitaker had been brought in to investigate the Obama-era FISA fraud and recommend corrective actions.

The topic of FISC corruption and what to do about it – plus a few more subjects – were covered by a panel on Lou Dobbs’ show earlier this week. The panel included Rudy Giuliani (the President’s personal lawyer), Sidney Powell (LTG Flynn’s lawyer), and Tom Fitton (President of Judicial Watch). Here is some of that Q&A:

Dobbs: … We’re going to take up the corruption of the FISA courts now and what’s being done to fix them. We’re going to explore who’s in charge of those FISA courts that have been played for fools by frauds. The secret FISA court that allowed President Trump’s campaign to be spied on … recently dodging questions from House Republicans Mark Meadows and Jim Jordan about a former Obama official who has been tasked with working on reforms of the courts. Presiding Judge James Boasberg selected Obama-era Assistant Attorney General David Kris to oversee the reforms. Boasberg claims that it is the court that will determine the final outcome of any proposed surveillance reforms and not Kris himself: “In all cases, however, amici is purely advisory, and it is the court, not the amicus, that oversees each matter and determines its outcome.” Now that is interesting reasoning. Judge Boasberg, an Obama appointee, was placed on the FISA court by none other than Chief Justice John Roberts, who presides over those courts as well. On January 7th, Boasberg wrote that the final two FISA warrants against Carter Page were invalid and not lawfully authorized. … We should also point out the 17 instances of FBI lying before those courts. We know that four of the applications were fraudulent, and the court is rancid – it seems – with its own brand of corruption. Your thoughts about first – whether they should be reauthorized, and secondly, whether we can leave it up to Chief Justice Roberts or Judge Boasberg or [David] Kris to actually do anything about it.

Powell: It’s not looking good right now. I certainly wouldn’t trust Mr. Kris or Judge Boasberg with reforms. If we’re going to keep the FISA court system, it needs to be revamped completely, including much greater oversight with some citizen involvement and lawyers to defend particularly American citizens who were implicated in any sort of FISA application. It really is meant to apply to foreign agents, not American citizens like Carter Page or Michael Flynn, and the way it was abused here is just beyond the pale.

Dobbs: This kind of an action by Boasberg seems to be almost a continuation of the same attitude and the same values that permitted the FISA courts to be defrauded – and willingly so.

Fitton: Look, they were warned almost two years ago that there was a problem, and the court did nothing. We [Judicial Watch] asked for hearing transcripts. The courts told us there were no hearing transcripts. So you had federal court judges take up warrants to spy on President Trump … candidate Trump, then President Trump … and they didn’t think it important enough to hold a hearing on it. I know it doesn’t happen all the time, but it should have happened in those circumstances. The best FISA court reform is to put someone in jail for lying to the courts, and in this case, what’s disappointing in this case is that the court didn’t institute on its own criminal proceedings to figure out who’s responsible for this criminal defrauding of the court. If you [Giuliani] were doing that back in the day, they would have hauled you and your attorneys into the court in a closed hearing to explain why you shouldn’t be put in jail RIGHT NOW. That’s what Judge Boasberg needs to be doing. … There’s no reform needed. The law prohibits what happened. We don’t need new reforms.

Dobbs: When I look at what’s happened over this presidency – and what happened for six months before, and I suspect was much longer than six months – I can’t believe that this is the United States of America because the attorneys themselves … the judges … are part of that political corruption. It’s one thing to talk about it in the Justice Dept and the FBI, as abhorrent and gut-wrenching as that is. Then the court system itself appears to be accomplices.

Giuliani: I don’t understand … Chief Justice appointing somebody who’s involved in the investigation to oversee the reforms. I mean, Boasberg signed the [warrants] … he says now they were fraudulent. He should be asked questions about this … “Did you notice the changes between Warrant 1, 2, 3, and 4.” I was there [in DoJ] for the beginning of the FISA court under Attorney General [Edward Levi, and then I’ve probably done about 50 of those. I got asked questions by judges; I got asked questions by judges on Title 3 applications, which is the domestic wiretap applications. And if all of sudden you put in that the informant has sort of dropped off the FBI orders, unless you get out and read the damn thing, that sort of jumps out at you, this guy jumped off the FBI list … give me an explanation. Maybe they asked that question; maybe they didn’t. If they didn’t ask that question, they were negligent.

Powell: What’s really scary is that four different judges signed off on those applications, and they didn’t contain a single first-hand assertion of wrong-doing.

Powell: I think Mr. Barr wants to restore the rule of law, and to do that, he has to apply it equally regardless of political party. So to decline to prosecute McCabe for lying to the Inspector General under oath and with the benefit of counsel repeatedly means he has to dismiss the prosecution of General Flynn who was never even warned of his rights and was never under oath, aside from the multiple other violations with respect to Mr. Flynn. In fact, nothing in the Flynn prosecution or investigation was done properly.

Giuliani: Comey gets off – easy-peasy prosecution – he admitted to leaks, including classified information. He lied to the FBI. Same thing with McCabe; he lied four times, both under oath and not under oath. And now we’re expected to think that easy prosecutions like that aren’t pursued, but they will be pursuing complex prosecutions on the Spygate gang that targeted the President of the United States? I don’t see it happening. That’s why I’m upset about it. I think Sidney is absolutely correct, and there is a double standard, and Barr has to break the double standard. A man who lied multiple times under oath – material lies – things they didn’t know. On the other hand, you have a man who was trapped; he was given false information by counsel. They had the actual answer to the question in their briefcase, but they trapped him. That’s it. One count, not under oath. Of course, you have to dismiss that case. Because one’s a Republican and one’s a Democrat, and you have different justice? That’s the way half of America feels not if not more. They are outraged. They look at Trump going through impeachment for allegedly threatening the president of Ukraine, and they see Biden walking around free for three years after he admitted threatening the president of Ukraine and getting $14 million. And they [the American people] say, “double standard”! That’s not America.

Powell: I think it could be done by the existing Dept of Justice. If it’s not done quickly, then yes [appoint an independent special counsel].

End of the Q&A. To summarize: 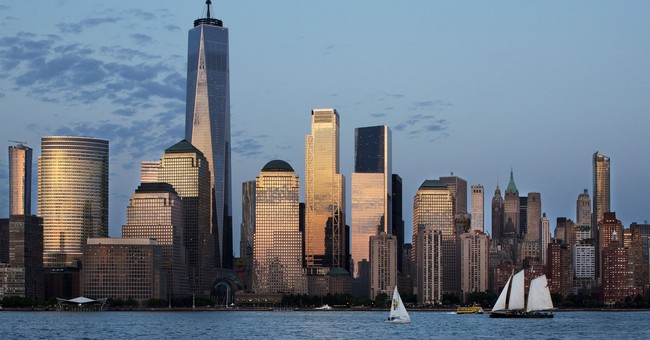 The Death Of The Office Has Been Greatly Exaggerated