A very provocative article appeared in Defense One this part Thursday written by Thomas Wright, a fellow at the Brookings Institute, a leftwing non-profit “think tank” that contributed to many ideas put into practice during the disastrous Obama years: implementing the “soft power” doctrine, facilitating the “Arab Spring,” going soft on Russia, looking the other way while China continued to eat our lunch, making a deal with the Islamic Republic of Iran (still the world’s foremost sponsor of terrorism), etc. You may recall that Brookings has been virtually underwritten by Qatar and has had a cozy relationship with the Muslim Brotherhood. Oh, and Fiona Hill (she of Democrat impeachment farce fame) has now returned to the Brookings Institute from whence she came before joining the National Security Council in early 2017.

Wright also is a contributor to The Atlantic, which has become the home for leftwing Democrat dissent on President Trump’s America First foreign policy reset. He styles himself as a proponent of “progressive foreign policy” (whatever that is) and has been sniping at President Trump from the cheap seats over the past several years. As one example among many such, he penned a piece last November entitled, “The Yes-Men Have Taken Over the Trump Administration.”

Wright is virulently anti-Trump, so it was very interesting to read his long piece that discusses a “2021 Democrat foreign policy” that rethinks the neoliberal failures of the Obama years, all of which were exposed by President Trump. I am going to examine and comment on selected passages from his article. Here we go:

[A]n influential group in the wider Democratic foreign-policy community from which Biden will draw if he wins, including some people who are a formal part of his campaign, have not been thinking about how to return to Obama’s policies. They have spent much of the past three years thinking about what they need to do differently if they have another bite at the apple.

Me: These people are lining themselves up for senior foreign policy positions in a Biden presidency (perish the thought). They aren’t “returning to Obama’s policies” because even they have recognized those policies were failures. These guys remind me of Samantha Power, who penned her infamous memorandum, Conventional Washington versus the Change We Need, that formed the basis for Obama’s disastrous soft power foreign policy. You’ll note that the link to that memo was to The Atlantic, where it was much-discussed in order to influence the foreign policy of a prospective Democrat president. Same old, same old going on now at The Atlantic as they hope and plan for a Biden presidency, including lining themselves up for plum jobs in the State Dept and National Security Council.

Their critique is not really of Obama per se, nor is it just about Trump. The view is more of a conviction that the world has changed in fundamental ways since 2012—when Xi Jinping came to power, Vladimir Putin returned as Russia’s president, and Obama was reelected. Over that eight-year period, democracy has eroded, nationalist populism has grown in the West, and authoritarianism has strengthened globally. Economic discontent has increased even though the U.S., until recently, experienced growth and high levels of employment.

Me: They refuse to overtly admit that Obama’s foreign policy was a disaster, as he did nothing to confront the rise of authoritarianism about which these progressives are now concerned. In fact, Obama’s foreign policy ENABLED that authoritarianism. That last line about “economic discontent” is pure baloney – unless Wright is referring to discontent in the EU which has been suffering under a high tax and high regulatory scheme supported by the likes of the globalists at Brookings for years.

The 2021 Democrats no longer talk about the goal of American foreign policy being a liberal international order, as they did during the Obama years. They still believe in international cooperation and a values-based foreign policy, but they don’t think the term resonates, nor does it capture the essence of their approach. “Free world” is how some refer to this worldview, a term that Biden now uses.

Me: Duh. If anything, President Trump has shown that the globalist would-be emperors have no clothes, and that the Obama-era foreign policy was a complete failure. A “values-based foreign policy” is the typical leftwing gobbledygook, as their values (globalism, open borders, free trade) are analogous to the “love that dare not speak its name” in terms of international relations in the era of the Wuhan virus pandemic. Remember Hillary screeching about “our values” during her 2016 campaign? Her “values” aren’t mine, that’s for damn sure.

The 2021 Democrats are worried about rising authoritarianism and see the world as a more geopolitically competitive place, particularly in U.S.-China relations. An influential article by Kurt Campbell, the assistant secretary of state for East Asian and Pacific affairs during the Obama administration, and Ely Ratner, Biden’s deputy national security adviser in Obama’s second term, argued that some of the key assumptions underpinning China policy—for instance, that commercial engagement with China would lead to economic liberalization, and China would become a responsible stakeholder in the international order—were wrong.

Me: It was President Trump’s America First policy that exposed the ChiComs for the authoritarians that they are, which has been driven home by their Wuhan virus cover-up for all the world to see (even progressive Democrats, apparently). To think that these people would have been pulling the levers of a Hillary Clinton foreign policy over the past three years! The globalists like these guys sold Americans on the notion that “commercial engagement with China would lead to economic liberalization,“ and the direct result has been the largest transfer from of wealth in human history (from the US to China), as well as the loss of millions of US manufacturing and production jobs to China over the past 40 years.

Dramatic changes are also afoot for the Middle East. Centrist Democrats now openly question whether the region is worth the high levels of military engagement the United States has maintained for decades.

Me: Once again, President Trump is showing the way. Remember that these guys were all in on the Arab Spring and the Muslim Brotherhood, and now they’re magically reversing course? Big talk.

The 2021 Democrats have also learned some lessons from Trump. They know the sky did not fall when he supplied the Ukrainians with lethal assistance, which many Democrats (including former Deputy Secretary of State Strobe Talbott, former U.S. Ambassador to Ukraine Steven Pifer, former U.S. Ambassador to NATO Ivo Daalder, and former Undersecretary of Defense Michèle Flournoy) unsuccessfully argued for during the Obama administration. They saw that catastrophe also did not strike when the Trump administration retaliated against Bashar al-Assad’s use of chemical weapons, or when U.S. forces killed large numbers of Russian mercenaries in Syria. They watched Trump employ tariffs on China and play tough with the Europeans over defense spending. Although many of these policy thinkers disagreed with much or all of what Trump did in the foreign-policy arena, they have also noted that they can use leverage for their own ends, including to prevent the further erosion of democracy, to deter aggression, and to reform the global economy.

Me: Damn straight that these progressive policy “thinkers” (not in my book) “disagreed with much or all of what Trump did in the foreign-policy arena”! They would have gladly worked in a Hillary Clinton administration to perpetuate the disasters wrought by Obama: the mess in the Middle East, ISIS unchecked, a resurgent and emboldened Iran, and an unchecked Russia. That they are “grudgingly” now recognizing President Trump’s successful use of US economic leverage to reshape a more America-centric foreign policy is amusing. That leverage was always there and ready to be used by all American presidents since World War-II, but these “thinkers” are just waking up to that fact now? Their support for soft power was the opposite of using America’s economic leverage, as they believed that “quiet diplomacy” was the key to an effective foreign policy.

On China, decoupling is where the disagreements are most pronounced. Some argue that technological separation is basically impossible except in a very small number of sensitive technologies. Others argue that decoupling should encompass a larger part of the technology sector and may expand to include other parts of the economy, in part to reshore crucial supply chains, such as for pandemic response, and in part to reduce U.S. vulnerabilities to Chinese economic coercion. Others still wonder whether interdependence gives America more leverage over China and may be a strategic advantage.

Me: Decoupling from China and “reshoring crucial supply chains” wouldn’t even be on their radar screen had it not been for President Trump’s efforts to rebalance US-China trade and expose unfair Chinese trade practices and our dependencies on the Communist Chinese for key strategic global supply chains. In a Hillary administration, these people would have continued blithely kowtowing to the Chinese and letting them steal us blind on the technology and intellectual property front. These people still don’t understand the long-term objective of the ChiComs’ Made in China 2025 initiative – world economic domination – and indeed don’t even discuss it or China’s Belt-Road and Maritime Silk Road Initiatives! Someone needs to ask these fools why Iran and Italy were Wuhan virus hotspots, for starters. And then watch the deer-in-the-headlights looks on their faces.

There is much more insight to be gained in Wright’s article about what to expect in the way of foreign policy initiatives in a Biden presidency. Policies that germinate (rot?) at Brookings and in The Atlantic are frequently enacted in Democrat administrations – with disastrous consequences. They would use the economic leverage that they have watched President Trump successfully wield on the world stage for their own progressive globalist ends, not for the betterment of the United States, and they would make a hash of things just as Obama did. And for this reason, they should not ever be allowed to directly influence US foreign policy again.

There is a big foreign policy reason for reelecting President Trump, and that is to keep the “2021 Foreign Policy Democrats” on the sidelines for at least the next five years. 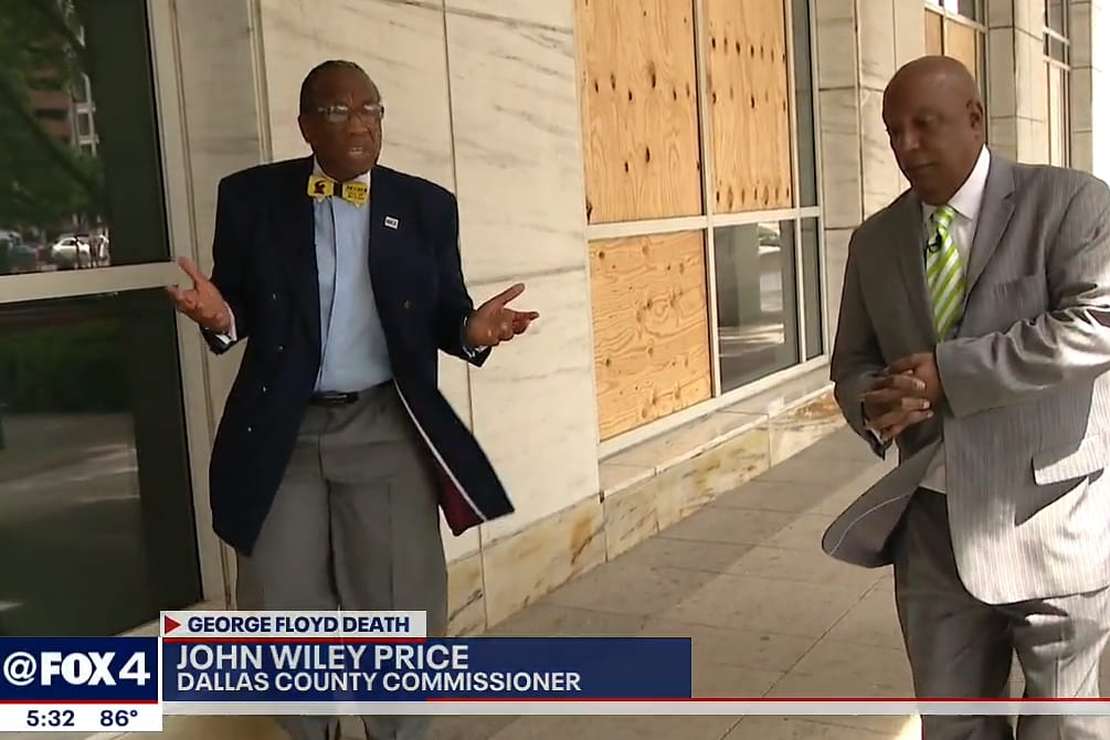 Black Democrat Slams Riots, Applauds Curfews: 'This Is Not Protest; It's Anarchy'