I Blame Us All. Don’t Worry: You Will Too.

So, as we begin our gallant charge into electoral defeat in November in earnest, I think it’s time to lay the blame for this primary season where it belongs: The voters.

We’ve all spent a good bit of time deriding and decrying the Establishment for our current straits, and I truly believe they deserve some criticism. National Review backhanded its cruise participants by calling Newt Gingrich a meanie and only recently appeared to realize that there will be no Romney Administration until Tag runs in a couple of decades. Oops. (But don’t worry: They also endorsed Huntsman and Santorum because of their awesome campaigns and executive experience.) Elected leaders and large donors did what Republicans are all accused of doing and got in line for the waste from the prior primary. Their cries of buyer’s remorse are more than a little empty these days. Conservative and nominally Republican pundits swooned over a man who couldn’t put away John McCain and Mike Huckabee, and have been vaguely surprised that he can’t put away Newt Gingrich and Rick Santorum.

And then there’s Jennifer Rubin, who praised Rick Santorum for months IN A WAY WE ALL TOTALLY BELIEVED, and so totally not as an obvious foil for Mitt Romney, and then was shocked! SHOCKED! to discover that he’s a conservative Catholic who spends a lot.

In fairness, she thinks there’s something called the Nicene Code (now a film starring George Clooney and Rachel Weisz). Chivalry requires us to believe her protestations that she’s addled, and not a detestable, lying, harpy shrew.

But to assert that these people have put us in these straits alone is like what certain illegal immigrant advocates do when they act as if their clients are swept along by unyielding fate and forced to break the law (or are some magical cure for our social or economic or whatever ills): They objectify and infantilize those they should be championing.

And that leads us to the voters. It was not David Brooks or Ann Coulter or poor Jennifer Rubin (can she even legally vote?) or the entire staff of National Review who provided something on the order of 2,000,000 popular votes to Willard “Mitt” “One Time Winner” Romney.

We must start by blaming the voters of Iowa and New Hampshire, who gave us Mike Huckabee and John McCain in 2008, and are giving us Rick Santorum and Mitt Romney in 2012.

Now, it’s tempting to say that, based on the last two cycles, residency in New Hampshire should permanently disqualify you from voting for a Republican nominee, and frankly, everything from President down to Sanitation Director. And I think we can all get behind that. I think the case could be made almost as strongly for Iowa, but they’re just making protest votes, so they’re basically harmless.

But in every state since those states, actual, real Republicans have voted for a man who even Slate notes (in excruciating detail) is lying about abortion; a man who on forced retirement from the Senate actually raised the real IQ average of the caucus; and a man who is still Newt Gingrich.

And Ron Paul, but I’ve long thought the strength of the onanist vote is underrated.

When a moderator asks, “Governor Romney, there is no substantial difference between your health care plan and the President’s. You’ve said there are things you would change about the President’s plan. Aside from its national scope, what are those?” and he ends up saying, “Nothing,” we will have only ourselves to blame.

We have tossed away our best chance to beat Jimmy Carter in thirty-odd years. What should be a national pastime is instead turning into a national joke.

We should put ourselves in timeout until November, and force ourselves to listen to Jennifer Rubin. Only then will we have begun to do penance sufficient to offset our guilt. 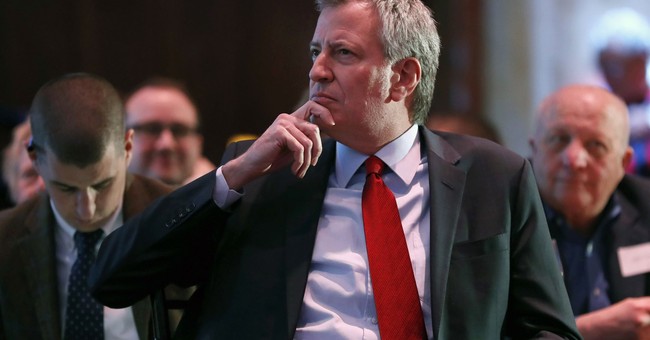 Yes, the Mayor Painted Fifth Avenue But Here's How Many People Were Shot in NYC This Weekend